DifferentialEquations.jl - part 2: decision from the model

In the last article, we explored different modeling options for a three-component systems which could represent the dynamics of a chemical reaction or a disease propagation in a population. Building on top of this model, we will formulate a desirable outcome and find a decision which maximizes this outcome.

In addition to the packages imported in the last post, we will also use BlackBoxOptim.jl:

The reactor where the reaction occurs must remain active for one minute. Let’s imagine that $B$ is our valuable component while $R$ is a waste. We want to maximize the quantity of $B$ present within the system after one minute, that’s the objective function. For that purpose, we can choose to add a certain quantity of new $A$ within the reactor at any point. $$t_{inject} ∈ [0,t_{final}]$$.

There is one major feature of DifferentialEquations.jl we haven’t explored yet: the event handling system. This allows for the system state to change at a particular point in time, depending on conditions on the time, state, etc… 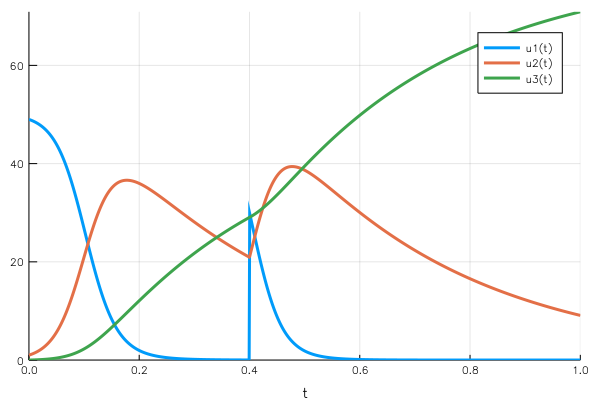 The ContinuousCallback construct is the central element here, it takes as information:

From the previously built function, we can get the whole solution with a given injection time, and from that the final state of the system.

Using a plain for comprehension, we fetch the solution of the simulation for the callback built with each $t_{inject}$. 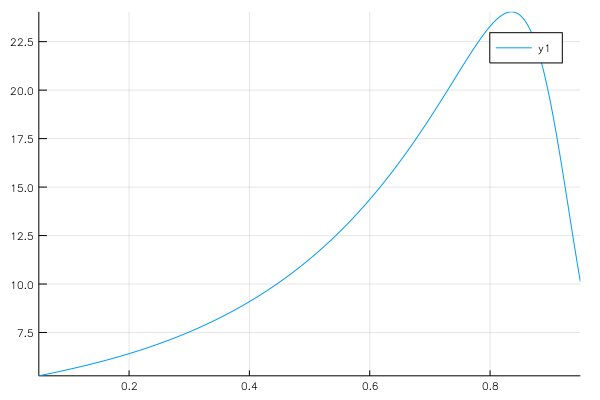 Injecting $A$ too soon lets too much time for the created $B$ to turn into $R$, but injecting it too late does not let enough time for $B$ to be produced from the injected $A$. The optimum seems to be around ≈ 0.82,

The package requires an objective function which takes a vector as input. In our case, the decision is modeled as a single variable (the injection time), it’s crucial to make the objective use a vector nonetheless, otherwise calling the solver will just explode with cryptic errors.

We get a detailed result of the optimization including the method and iterations:

The function inject_new we defined above returns the complete solution of the simulation, we get the state matrix u, from which we extract the final state u[end], and then the second component, the concentration in B: u[end][2]. The optimization algorithm minimizes the objective, while we want to maximize the final concentration of B, hence the -1 multiplier used for
compute_finalb.

We can use the Optim.jl package because our function is twice differentiable, the best improvement direction is easy to compute.

The decision over one variable was pretty straightforward. We are going to extend it by changing how the $A$ component is added at $t_{inject}$. Instead of being completely dissolved, a part of the component will keep being poured in after $t_{inject}$. So the decision will be composed of two variables:

We need a new variable in the state of the system, $u_4(t)$, which stands for the input flow of A being active or not.

We already built the key components in the previous sections. This time we need two events:

We wrap the solution building process into a function taking the starting time and the fraction being directly injected as parameters:

We can notice callback_start being identical to the model we previously built, while condition_end corresponds to the time when the total injected quantity reaches inj_quantity. The first events activates $u_4$ and sets it to the nominal flow, while the second callback resets it to 0. 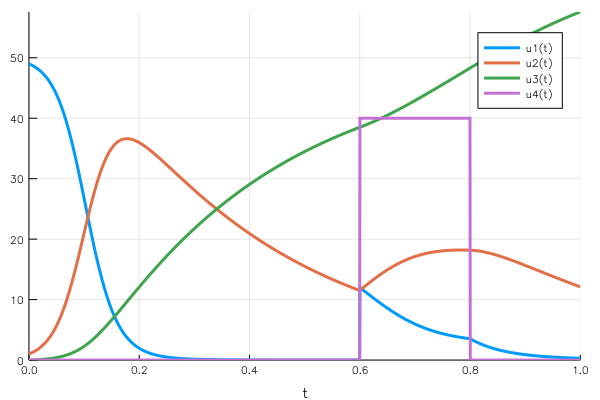 Optim.jl can be re-used to determine the optimal decision:

The result details are:

We wrap our function in a Optim.OnceDifferentiable to provide Optim with the information that the function is differentiable, even though we don’t provide a gradient, it can be computed by automatic differentiation or finite differences.

The optimal solution corresponds to a complete direct injection ($\delta \approx 1$) with $t_{inject}^{opt}$ identical to the previous model. This means pouring the A component in a continuous fashion does not allow to produce more $B$ at the end of the minute.

We could still built on top of this model to keep refining it, taking more phenomena into account (what if the reactions produce heat and are sensitive to temperature?). The structures describing models built with DifferentialEquations.jl are transparent and easy to use for further manipulations.

One point on which I place expectations is some additional interoperability between DifferentialEquations.jl and JuMP, a Julia meta-package for optimization. Some great work was already performed to combine the two systems, one use case that has been described is the parameter identification problem (given the evolution of concentration in the system, identify the α and β parameters).

But given that the function I built from a parameter was a black box (without an explicit formula, not a gradient), I had to use BlackBoxOptim, which is amazingly straightforward, but feels a bit overkill for smooth functions as presented here. Maybe there is a different way to build the objective function, using parametrized functions for instance, which could make it transparent to optimization solvers.

2018-01-31:
I updated this post to adapt to the new DifferentialEquations.jl interface. I also used Optim.jl for the two cases without BlackBoxOptim.jl, which is very nice but not necessary for differentiable functions.

Special thanks to Patrick for his quick response and help with Optim.jl.

2017-12-20:
Of course, BlackBoxOptim.jl was not the most appropriate algorithm as predicted. Patrick and Chris gave me some hints in this thread and I gave Optim.jl a try.

This package has a range of algorithms to choose from depending on the structure of the function and the knowledge of its gradient and Hessian. The goal is continuous optimization, (as opposed to BlackBoxOptim.jl which supports more exotic search spaces).

Finding the optimum $t_{inject}$ of the first problem is pretty simple:

This yields the following information:

14 calls to the objective function, pretty neat compared to the hundreds of BlackBoxOptim. We also confirm the optimum of 0.8355891. Not yet sure we could use Optim.jl for the second case (boxed multivariate optimization without explicit gradient).